Remember the beginning of October I told you about the Listerine Oral Care Challenge? I wanted to update you on how we did. I tracked for three weeks, but unfortunately Buddy was trying to be helpful and he erased the chart one week before I could get a picture. Overall we are doing MUCH better than we were before the challenge. Having to keep the Oral Care chart made me pull out the kids’ chore cards again which makes getting tooth-brushing in easier. The kids each have a wooden board with pegs on it and they have cards with their daily chores on them. Each card is a different chore, so they have a card in the morning and night to brush their teeth. If they finish each card for the day they get a sticker on a sticker card. Once 10 stickers are collected they earn a special date night with the adult of their choice (Mom, Dad, Grandma, Grandpa, etc.)

The hardest thing for us is the days that the kids are running extremely late in the morning because brushing their teeth is the last thing they do before running out the door. The other challenge is the nights that we’re out late, because the kids will fall asleep in the car and then not get their teeth brushed because we just put them straight to bed. I suppose I should put a baggie with travel toothbrushes and toothpaste in my purse so if we know we’ll be out late we can brush before getting into the car. 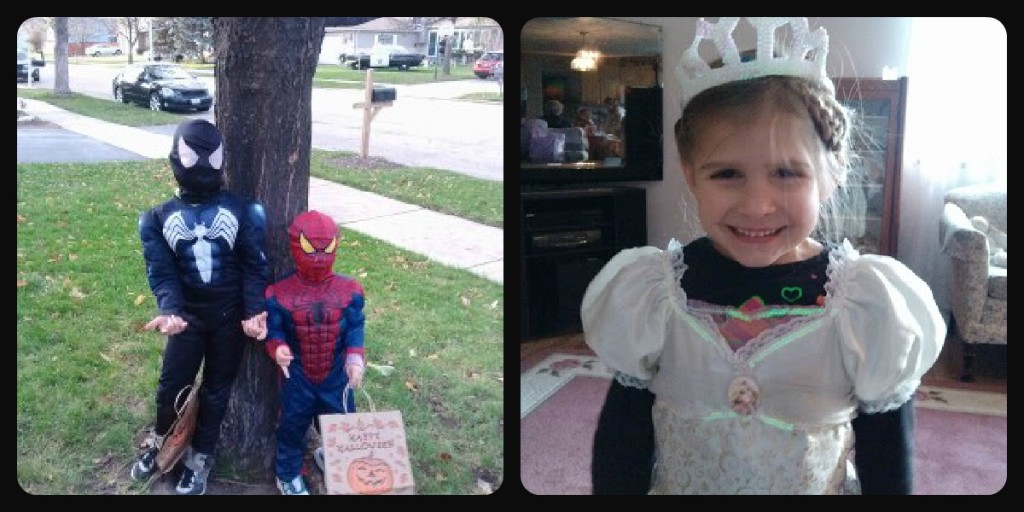 I have to share a story from Halloween, because my kids have really changed since last year. Last year their goal was to get as much candy as they could; you couldn’t keep them out trick or treating long enough. Here’s how it usually works: my sister in law and I will take out all the kids right around 4, when the hours start. We then go back to my mother’s-in-law house for dinner and by then the dads get home so they will take the kids back out after dinner for a second round. It seemed a little hard to get them motivated to go out for the second round, but we did. They finished one block and were done. There was no talking them into going longer! In fact, Buddy was trying to talk his boy cousin into stopping with him. He said “Do you want more candy that’s bad for you or do you want to come play with your cousin?” It didn’t work; his cousin went trick or treating more with his Mom and Dad. I thought that was cute. The kids haven’t bugged me much about the candy, either. I think that all this talk about healthy eating with them has changed them. Now to get them to care as much about their teeth! We are definitely getting there, though. Monkey gets very upset if she has to leave the house without brushing or using her Smart Rinse. Buddy still doesn’t like the Smart Rinse. I can tell he hasn’t been using it like he’s supposed to. I think I’m going to have to add in another incentive to get that as part of the routine for him.

Do you have any suggestions I can use to get these kids to get both times a day to brush their teeth? Morning routines have been rough and the kids have been getting there after the first bell. I don’t know how to get them moving lately. Be sure to check out more about Listerine at their website and follow along on Twitter at #SweetSmart.

Note: I wrote this review while participating in a campaign by The Motherhoodon behalf of Listerine and received product and compensation to facilitate my post.