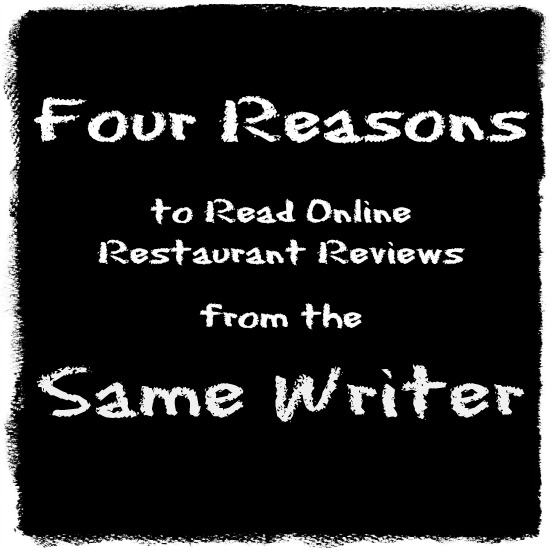 Reviews for every product and service you can imagine are now available on the Internet, and many of these products are used every day by people. Dining out at various restaurants in your local community is a good example, and there are many reviews for local restaurants online. With so many restaurant reviews available, you cannot read all of them. Are there certain reviews that are more important than others? The truth is that there are, and these are the reviews that are written by the same person. There are four reasons to focus on reading reviews by the same author.

Restaurant reviews are best when you know the reviewer
Of course, this doesn’t mean that you know the reviewer personally, but it does mean that you are familiar with his or her reviews. Once you have read several reviews by the same person, you will begin to get an idea of what the writer likes and dislikes in restaurants as well as their taste in food. When you get to know a reviewer like this, you will be able to get a better idea about a restaurant that is being reviewed. You will understand what biases a reviewer has about a type of restaurant or dish, and you will be able to factor this in when deciding whether you want to visit the restaurant.

A ranking system means more
When you look at a ranking system that rates restaurants on a scale of one to five or perhaps a star system such as one star to four or five stars, it has more meaning to look at this rating from a single reviewer, especially when you know the writer’s history. A three out of five star review from a writer you know will have more meaning than an average of three stars from a hundred different reviewers who are unknown to you.

Food writers have more knowledge
The fact is that most people eat out on occasion, but a food writer is always eating at new establishments and trying new dishes at restaurants he or she has already visited. They have a vast knowledge of what is available in the area and how the food compares to other establishments in the city. They usually know what a dish is supposed to taste like, even in circumstances when the dish is something new in town.

There are many examples of restaurant reviewers that can be found online at various websites and blogs. One example of this is the Max Gorin posts on his blog.