Note: This shop has been compensated by #CollectiveBias, Inc. and its advertiser. All opinions are mine alone. #ItsADaisy 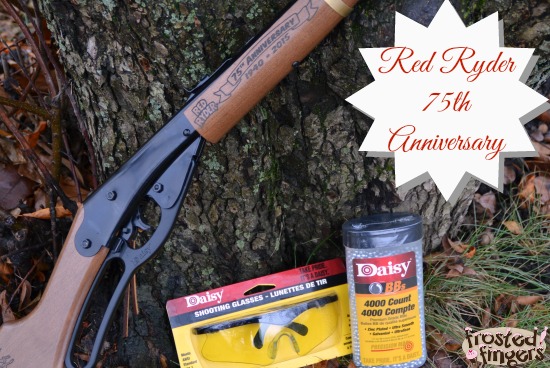 I’ve been having a hard time coming up with Christmas Gift Ideas for Buddy. One of his favorite things to do in Cub Scouts is shoot BB Guns. (Actually all of the kids do, but the rest of them aren’t old enough to have their own gun yet. They’ve all shot while we were at family camp for Cub Scouts while under the watch of range officers and had to listen to and obey all of the rules.) I’ve been wanting to get Buddy a Daisy Red Ryder since last Christmas, but didn’t think he was old enough then. 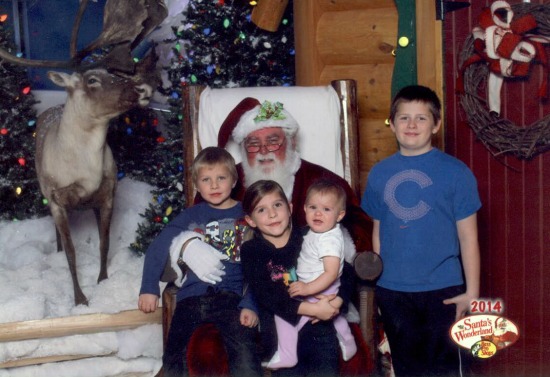 We took the kids to Bass Pro Shop to see Santa and to pick up a Daisy (though the kids had no idea!) They got to see Santa and it was Baby Q’s first time. Most people think she’s kind of smiling in the picture, but in reality she freaked a little when she saw Santa and they caught her mid screech. She got over it quickly. She was done with her fuss right after the picture was shot. I think it helped that Monkey held her instead of Santa. 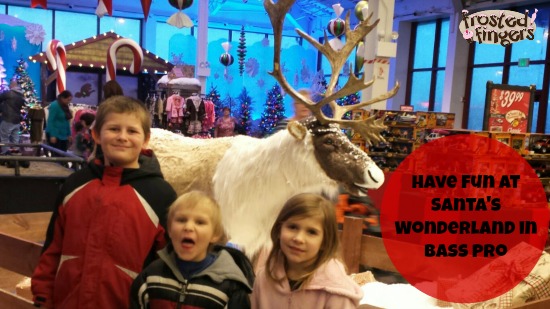 The kids always have a great time playing at Santa’s Wonderland at Bass Pro. We are lucky to have Bass Pro just a mile from our house so we can visit at any time. We had only about a 15 minute wait to see Santa because we got there right after he started for the day. By the time we saw him, though, the line was LONG! My suggestion is to get there as close to right after school as possible!

Lots more fun to be had besides this! @Bass_Pro_Shops #ItsADaisy #ad

There is always SO much to do at Santa’s Workshop. There are cars to race, pages to color, a carousel to ride, arrows to shoot, and so much more. Baby Q got to go on her first carousel ride as well while we were there! 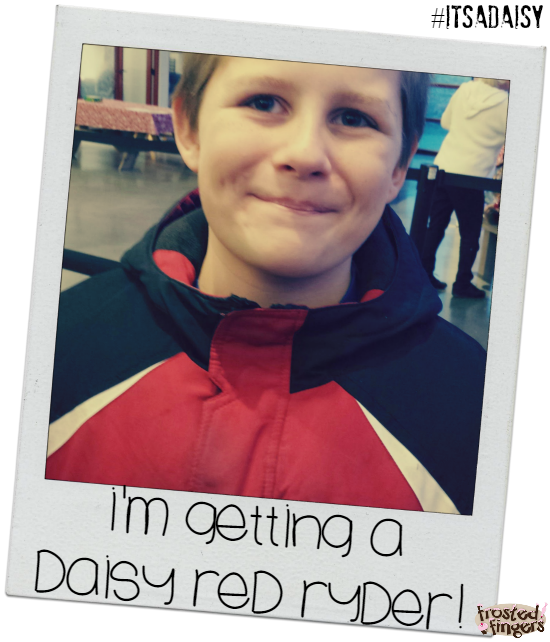 While we were standing in line for Santa, Buddy found out that he was getting a Daisy Red Ryder and he couldn’t contain his excitement! He wanted to get home to try it out right away. (Unfortunately, the weather around here has just been cruddy lately!) 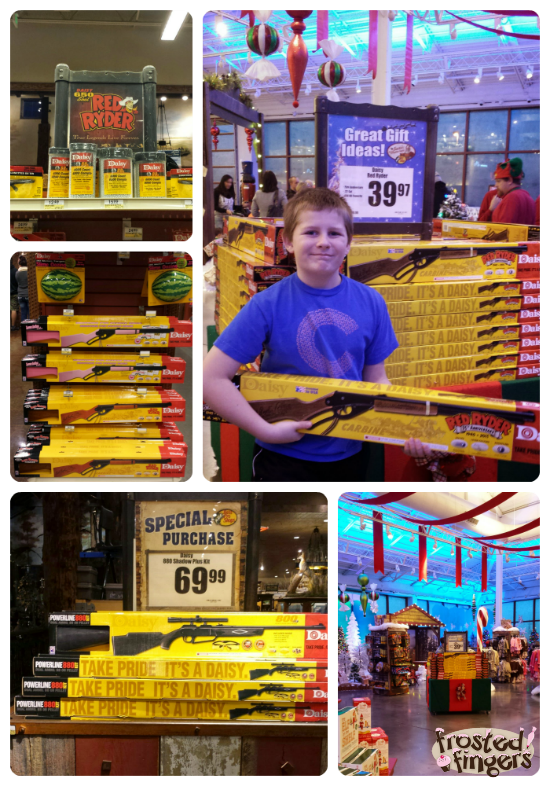 We were able to find the Daisy 75th Anniversary Red Ryder in the middle of Santa’s Wonderland, but in order to find the goggles and BB gun ammunition we had to go upstairs. 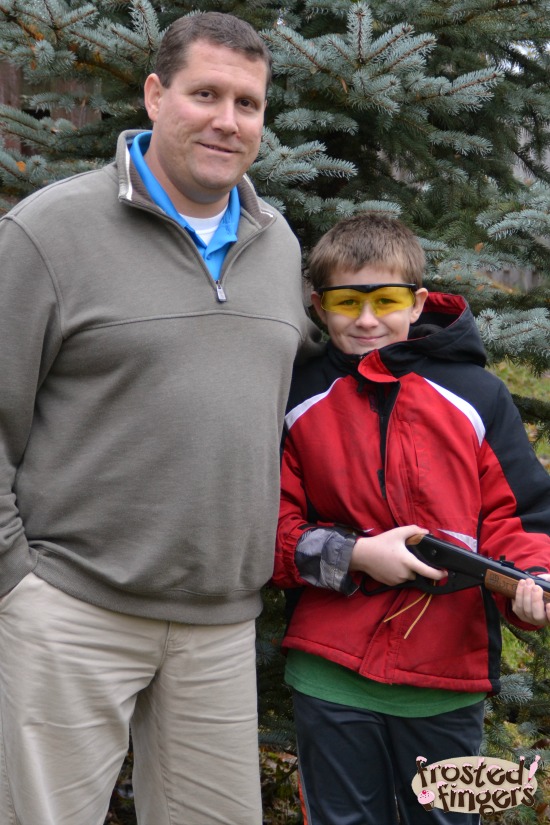 Like I said above, the weather has been cruddy, so we haven’t had a chance to go out and try out the gun yet. He can’t wait, though. I’m thinking we may have to build an indoor target range like Heather and her family made in order to get some time in with it during the winter! 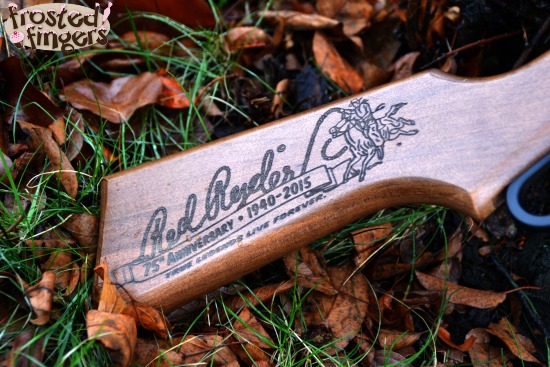 I love the detailed stock on the Red Ryder 75th Anniversary BB Gun. I am pretty glad that we held off a year to get him his first BB Gun since we were able to get this detailed model.

Did you know that Daisy educates roughly one million of America’s youth a year through their Ten Lesson Shooting Curriculum about BB gun use and safety (found here)? Daisy’s educational curriculum has been around since 1948. Daisy educates through its partnership with leading conservation and youth training organizations such as National Wild Turkey’s JAKES Take Aim, 4-H National Shooting Sports, Rocky Mountain Elk Foundation, Royal Rangers, Youth Shooting Sports Alliance, Civilian Marksmanship, NRA, JROTC units, scouting, fish and game as well as church and private camps. Daisy has also engaged the masses with portable, inflatable BB gun ranges that can be found at major outdoor sporting goods retailers and leading conservation organizations. The majority of those who attend the an outdoor or store event and shoot at the ranges are first-time shooters. 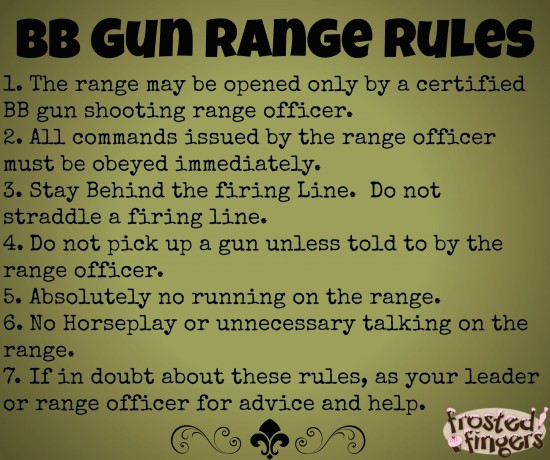 If you are in Cub Scouts and are looking for the BSA BB Gun Range Rules, I’ve included a nice pinnable picture of them! I’m surprised they don’t have wear goggles on the list. That is definitely on our list! You can pick up the goggles right along with the gun and ammo at Bass Pro. 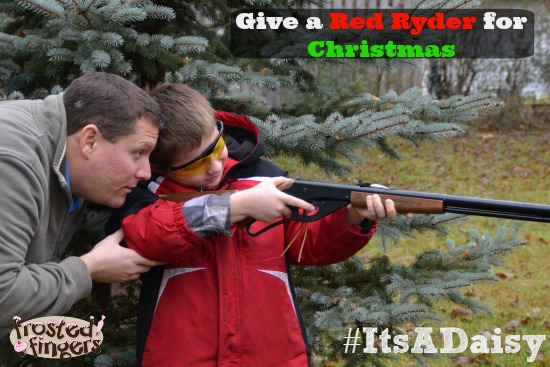 While you won’t get it in time for Christmas, we have a giveaway going for $2000 worth of Bass Pro gift cards {4 winners will receive a $500 gift card each}. Wouldn’t it be awesome to win that so you can purchase a Daisy BB Gun of your own? The winner must be 18+.

Previous Post: « 5 DIY Spa Treatments for Your Hair from Madison Reed
Next Post: Spectrum Workbooks for Homeschool or Supplementation »