disclaimer: I received a copy of the soundtrack as a member of Entertainment New Media Network. All opinions are my own 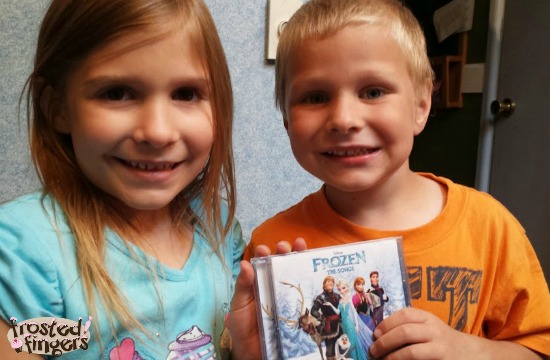 Ever since I took the kids to see the movie Frozen, they have been hooked on the music! We got the soundtrack for it back in December and Buddy will turn it on in his room while playing Minecraft and sing along. Everything Frozen is a big, big hit in our house. Monkey is going to be Elsa for Halloween. If I could have pulled off an Anna costume for BabyQ, she would have been in Heaven. We even talked about making Little Man Olaf and Buddy, Sven.

The kids were really excited to get a hard copy of the Frozen Songs because it came with a fun fold out poster and all the lyrics. Yay for finally learning ALL the words to “Let it Go!”
On September 30th, Walt Disney Records released Frozen: The Songs featuring all 10 songs from the Oscar ®-winning film, a vinyl edition and a Spanish language version Frozen Canciones de Una Aventura Congelada, plus the digital score album from composer Christophe Beck. The specially priced Songs CD also includes a fold-out poster and stickers.
How would you like to have some fun listening to Frozen with your kids 🙂 I’m giving away two copies of Frozen: The Songs.


If it come to this bloggers attention that the winner of my giveaway has won on additional blog, this blog reserves the right to choose another winner.