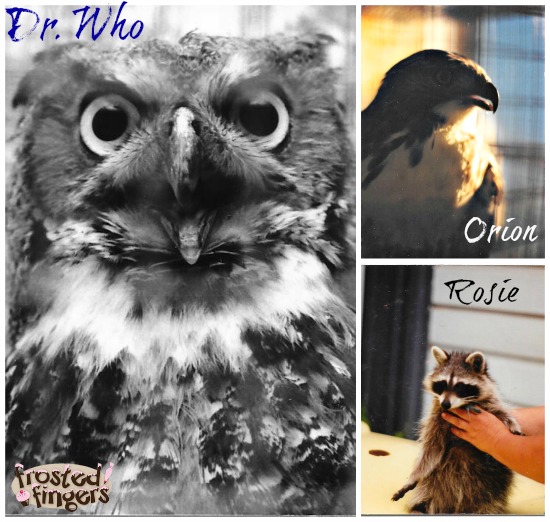 When I was growing up my Dad worked at a camp that allowed inner city children a chance to go to camp and learn about nature; a chance they may not normally have had otherwise. He also had a license to take care of injured and orphaned animals. He worked at the camp and was gone from home Monday morning until Friday evening. He’d bring his injured and orphaned animals up to the camp with him so that the kids could see wildlife up close. Don’t worry, they were in cages if they were wild! The Great Horned Owl, Dr. Who, pictured on the left was our owl for close to 20 years I think. She couldn’t be released back into the wild because she only had one wing. A hunter shot her and the vet wasn’t able to reattach the wing so we took care of her. I don’t specifically remember Orion. Rosie, the raccoon, though, was my absolute favorite. We adopted Rosie as a baby when her mom abandoned her tree when it was cut down. She was tame and amazing. It was like having a dog in the house. She’d play fetch and we’d take her on walks around the neighborhood (on a leash.) We ended up having to turn her wild again, though, because the vet couldn’t fix her and she was coming into heat. We returned her back to Camp Pokanoka, a Girl Scout camp that I grew up going to.

Back to the camp. I don’t remember a whole lot about it because I was pretty young. The camp was closed down when I was in high school, unfortunately. I know that the kids camped in cabins and were able to go on hikes, go swimming if it was warm enough, and do other school activities while there. I wish they would have had that option for kids in the suburbs!! I have always loved camping. 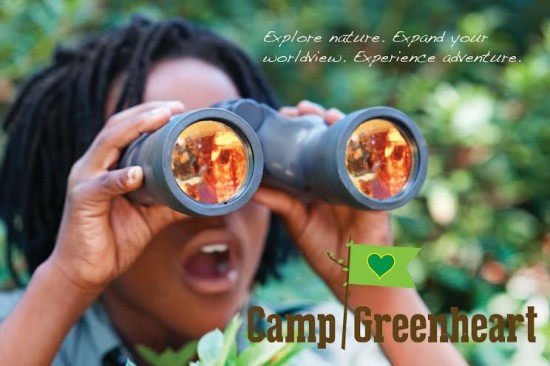 I have recently found out about a similar camp to the camp my Dad worked at; it’s called Camp Greenheart. Here’s a little about it:

The first annual Camp Greenheart will invite youth from the Chicago area to participate in a week of wilderness education, personal development, and cultural diversity. Children who attend Camp Greenheart will experience the thrills of exploring the wilderness of Wisconsin while creating new friendships and developing new skills. Camp Greenheart will take place at YMCA Camp Maclean in Burlington, Wisconsin from June 16-21. Camp Maclean’s grounds have a variety of facilities that all Camp Greenheart campers will have access too including a high ropes course, zip lines, an archery range, and an old-fashion toboggan chute. Campers will consist of middle school children, ages 9-13, from an array of socioeconomic backgrounds to create an atmosphere that breaks both cultural and economic barriers. Foreign exchange students from our current programs will serve as Camp Leaders, providing the campers with the opportunity to learn about cultures from around the world.

If you have a chance to let your child go, I suggest you do! It’ll be a lifetime of memories made in one week. There are also need based scholarships available. Go to Camp Greenheart for more information. My kids will growing up camping the way I did. Did you do a lot of camping growing up?