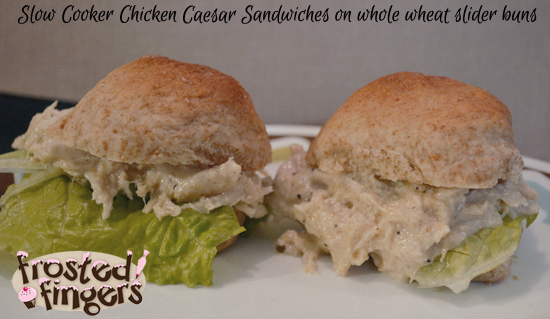 So the big game is this Sunday. I have a simple recipe that you can make that’s delicious! The best part? It’s homemade! Before I get there, I want to talk a little about how I got to this point. I haven’t bought bread in probably 3 months or longer. It’s not because I gave up bread, though, it’s because I’ve been making it from scratch at home. Whenever my kids see me making bread they start to cheer. Monkey is always begging for the bread straight out of the oven. I love that the bread I make not only makes them happy, but it’s made with ingredients that I can pronounce and that are healthy for them. Because of my love of home made bread, I applied to be an Fleischmann’s Yeast Ambassador and I got it! Over the next 8 months I’ll be sharing four different from-scratch recipes. I wanted to start off with a great recipe that’s good for the Super Bowl. Fleischmann’s provided the recipe for the Whole Wheat Slider Buns and I found the recipe for the slow cooker chicken Caesar sandwiches through my friend Alison on Pinterest.

Just a quick note on the chicken. I’ve read on Pinterest that an easy way to shred your chicken is to throw it in the bowl of your electric mixer with the paddle attachment. If you turn it on, it’s supposed to shred the chicken quickly and easily.  I haven’t tried it, but I saw good comments on it.

The rolls turned out a little dry for me. I’m not sure if it’s because I did it all by hand instead of pulling out my mixer. When my son saw that we were eating these for dinner, though, he was super excited. He loves this meal. I think it’s a great meal for a group of people, because it’s hand held. You can put the sandwiches together ahead of time or keep the meat warm in the slow cooker and let your guests assemble themselves.

In honor of the Super Bowl, Fleischmann’s Yeast is having a contest:

The Big Game promotion for Fleischmann’s Pizza Crust yeast will take place from 1/21 – 2/3 (the two weeks leading up to the Super Bowl). The promotion asks fans to submit their favorite pizza topping for the chance to win free product.  If fans also submit their favorite “Big Game” pizza recipe, they will be entered to win a grand prize including a pizza stone, pizza cutter, and other great prizes.

What are your go to recipes for the big game? Last year we went to a party and tried buffalo chicken cupcakes. I actually liked them and would like to make them for a party but anyone that ever visits my house wouldn’t eat them.

Note: I participated in a campaign on behalf of Mom Central Consulting for ACH. I received a promotional item as a thank-you for participating.