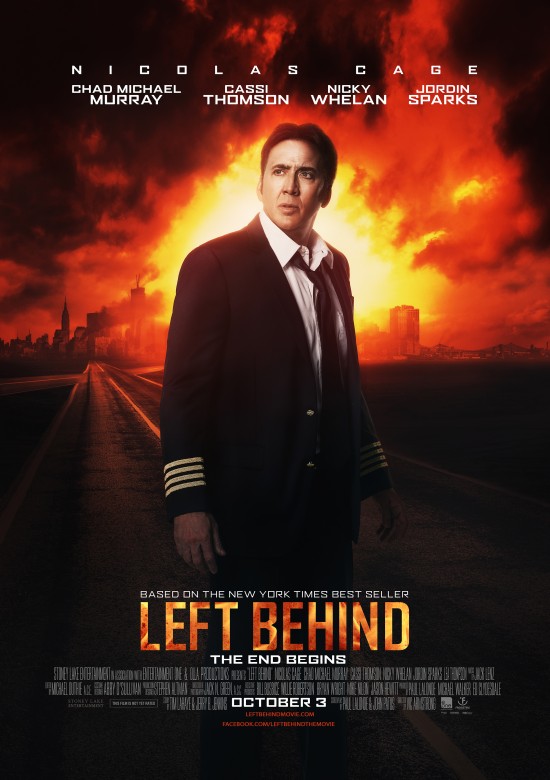 When I was in my early twenties, my work friend introduced me to the Left Behind series of books. I immediately couldn’t get enough of the series, but unfortunately not all the books had been released at that time. I hated always waiting for the next book to come out! I watched the version of the Left Behind movie with Kirk Cameron and was bummed that they never came out with a sequel to it. I’m really excited about this version of Left Behind with Nicholas Cage and Chad Michael Murray. (I used to love One Tree Hill with him in it!)

Left Behind is an apocalyptic Action-Thriller movie starring Nicolas Cage based on the New York Times bestselling novel that brings biblical prophecy to life in modern times.

The most important event in the history of mankind is happening right now. In the blink of an eye, the biblical Rapture strikes the world. Millions of people disappear without a trace. All that remains are their clothes and belongings, and in an instant, terror and chaos spread around the world. The vanishings cause unmanned vehicles to crash and burn. Planes fall from the sky. Emergency forces everywhere are devastated. Gridlock, riots and looting overrun the cities. There is no one to help or provide answers. In a moment, the entire planet is plunged into darkness.

The Steele family is caught on the razor’s edge of that darkness. RAY STEELE, an airline pilot, struggles to calm, and ultimately to save the lives of the passengers that remain on his flight, as the world below loses its ability to help his plane, and any other to safety. Running out of fuel, his equipment failing, his crew escalating into panic, Ray must guide the plane with the help of GWN reporter, CAMERON “BUCK” WILLIAMS who takes over the role of co-pilot in the face of the crisis. For Buck Williams, being trapped at 30,000 feet with a plane full of terrified passengers means a struggle to understand the incomprehensible.

On the ground, Ray’s daughter CHLOE STEELE struggles to find her young brother and mother, both of whom may have disappeared in the Biblical event. Forcing herself through the chaos, Chloe must navigate a world filled with terror and despair.