I was asking for a crockpot recipe to try last week and my new bloggy friend Sara suggested this Beef Stroganoff recipe. I think I’m starting to realize I’m not the biggest fan of beef in the crockpot. I liked the recipe a lot, but whatever happens to beef in the crockpot it just doesn’t taste right to me. Overall I’d make the recipe again and liked the flavor. The kids, of course, complained about it. Buddy said he liked it, but the other two, not so much. 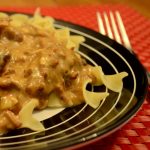